Prior to September 1950 Mass was celebrated occasionally in a private home, but except for these rare instances the Catholics of Blount and Sevier counties drove cars or rode buses to Knoxville every Sunday to attend the Holy Sacrifice of the Mass.

A survey, requested by Bishop William Adrian, to determine the number of Catholics living in the two counties was made in the summer of 1950 by Rev. John Tierney. As a result of this survey the Mission Parish of Maryville was established with the Reverend Paul Clunan appointed Pastor.

On September 3, 1950 the first Mass was celebrated in a funeral home in Maryville. During the search for a proper church site succeeding Sunday Masses were celebrated in the Community Room at Eagleton Village. Packing cases stored in the building served as a makeshift altar. If there were not enough chairs available, attending members stood throughout the Mass. 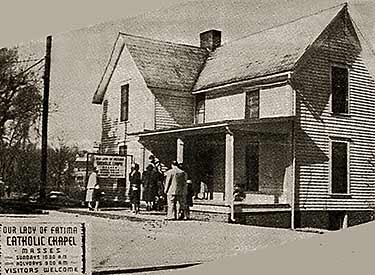 In November, 1950, a two story house located at 211 Ellis avenue in Maryville was leased and remodeling was begun with great enthusiasm. As in any project there were ups and downs, but plenty of fun was thrown in. A 700 lb. steel beam was delivered to the wrong church. The men of the church borrowed a truck, but were unable to move the heavy beam — curious bystanders, who had stopped to watch, found themselves being pressed into service and helpfully lent a hand. The new church was officially named Our Lady of Fatima. The living room and downstairs of the house were converted into the church. The kitchen became the church office. A three room apartment was constructed for Rev. Clunan

The first mass was celebrated in the new church at seven A.M. Sunday, November 5, 1950. It was truly a fulfillment of the dream of those Catholics who at long last had a church of their own. A few days later, a meeting of the women of the parish was held and the first Guild was organized. There were thirty eight ladies present.

The first High Mass was celebrated in the new church on Christmas Day. The choir was composed of ten members who were accompanied on an old, donated pump organ. On Sunday January 21, 1951 Bishop Adrian dedicated the little chapel and celebrated the ten o’clock mass.

Parishioners were already hoping to purchase property and build a church and rectory in the near future. There were approximately fifty families attending Our Lady of Fatima at this time.

During the following year many money raising projects were sponsored by both the men and women organizations of the church. The ladies held card parties and style shows. All members cooperated in a Fourth of July Festival held in Eagleton Village Community Center.

Several days after the first anniversary of the church, four and a half acres of land was purchased from the Aluminum Company of America. The location was centrally located and easily accessible for both Alcoa and Maryville parishioners. The tract was at the intersection of Hunt and Wright roads in Alcoa. About eighty percent of the parishioners lived in the vicinity of the property. The parish served about eighty families at that time.

Much activity ensued as the construction progressed. Parishioners borrowed earth moving equipment to landscape the grounds. Time and energy were cheerfully given as volunteers painted, sowed grass seed and planted shrubs to add to the beauty of the lovely, red brick church. 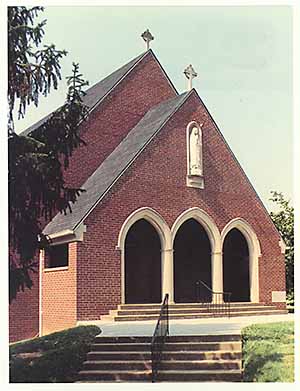 The dedication of the new church was held Saturday, December 6, 1952 with Bishop William Adrian again officiating at the ceremony. One of the church members had donated and installed a second hand pipe organ in the new choir loft. An excited, but inexperienced, choir was to sing the Dedication Mass. All went well until after the Gloria when several keys on the organ refused to play. A horrified choir sang the rest of the mass acappella! Hopefully, many of the new parishioners had never attended a church dedication before so they, no doubt, thought this was normal procedure. The choir did get through the ordeal and there were no complaints from Bishop Adrian. The dedication booklet contained the following admonition for future Our Lady of Fatima parishioners:

Again, parishioners planned projects to raise money. The annual festival was held plus maintaining a food booth at the Blount County Fair. Card parties and style shows were once more part of the program to obtain money to reduce the church debt and hopefully build a school in the near future.

In September 1955 Our Lady of Fatima School opened its doors, becoming the first Catholic grade school in the area. Two Sisters of Mercy and two lay teachers completed the staff. The school was in operation until it closed in 1970.

In 1975, after numerous years of hard work and sacrifice a very happy group of parishioners met in the church hall to participate in a mortgage burning ceremony. Both the church and school were debt free. In the ensuing years a rectory was also built.

By April 1986 the parish had grown to over 300 families. The festival was revived. A style show-card party was sponsored to provide funds to renovate the kitchen, which was completed in 1987. An extension of the parking lot was also completed.

Note: The preceding history was compiled by Charlotte Rowan and Betty Sodemann as of April 1986 and is presented here with minor editing by F.E. (Brownie) Brown to take into account past tense verbiage and events.

The years l986-94 saw OLOF realize a slow but steady growth. One relevant factor during these years was that by careful budgeting a substantial “nest egg” was accumulated which was greatly appreciated (and needed) in 1994 when it became necessary to begin planning for new and larger facilities. On September 8, l988, the Catholic presence and influence in east Tennessee was forever altered when many OLOF parishioners joined 5,000 other Catholics for the creation of the Diocese of Knoxville and the ordination of Bishop Anthony O’Connell as the first Bishop of Knoxville.

In mid 1993 we welcomed Fr. Joseph Brando as our new pastor. We were a parish of approximately 350 families. We were literally bursting at the seams. Weekend masses were often standing room only. The spring of 1994 saw the formation of a steering or preliminary committee for purpose of researching diocesan requirements, demographics of Blount county, availability of suitable property, possible designs for a church, and of utmost importance, testing the pulse of membership.

Basically it boiled down to 2 options: First, find 25 acres of new property in reasonable proximity to central Blount county at a cost we could afford. Second add on to existing facilities. A number of open meetings were held to explain and discuss these options. Membership was split 50/50 with sound logical arguments on each side. In the fall of 1994 it was learned the ATT building (present Fatima Center) was for sale at a bargain price. Frank Borbeck spearheaded the contact with ATT officials and arranged for an open house whereby all parishioners would have opportunity to tour the building. The 50/50 split disappeared over night. God had guided us through the first of many hurdles. Further evidence of God’s providence is evidenced by the fact the house (present rectory), located at the front of the ATT building had recently gone on the market. Thanks to the “nest egg” mentioned earlier we were able to move quickly with the purchase of both properties. The ATT closing was January 17,1995, followed by house closing on January 30.

Building and Fund raising committees were formed to begin the 5 year process of bringing the new OLOF to fruition. While the Building Committee was developing plans for renovation of the ATT building and house, a fund raising event was held at Green Meadow Country Club. At this time we had nothing definite for our parishioners to latch onto except that we would have a new church sometime in the next 5 years. This passage from Hebrews “Faith is the assurance of things hoped for, the conviction of things not seen”, certainly was evident as members joyously made their financial commitments.

The months between February 1995 and June1996 were, behind the scenes, extremely busy months. Renovation of the ATT building and house had to be planned and completed. The sale of the old church property had to negotiated and consummated. Suitable facilities for masses after the sale of the old property had to be located. In addition, the building committee interviewed and selected the architectural firm of Brewer, Fuller and Ingram of Knoxville to plan the new facility. Members were invited to several meetings with architects so that architects had a “feel” for what kind of church we wanted them to design. Also, after meeting with several potential general contractors, Merit Construction of Knoxville was selected. As construction progressed we were constantly reminded that the building committee had made the right choices.

The spring of 1996 was a time of drastic change. We sold the old property to Praise Temple. On June 6, 1996 we held our last mass on Wright Road. Following a liturgical guide we moved – in a steady rain – everything to temporary storage in the present Fatima Center. While renovation of the Center proceeded we held weekend masses in Fine Arts Center of Maryville College. Daily masses were held in the basement of the present rectory which had been at least made functional for our priests. August 11 and 12, 1996 we officially moved into Fatima Center with weekend masses. In order for us to begin construction, the Diocese required us to have one half of the cost of the new facility essentially in hand. Two fund raising dinners at William. Blount High School were held where parishioners were asked to make 5 year pledges to meet the diocesan requirement. God’s hand was again evident as we met the objective and construction could begin.

As with any building project, there is always the potential for “bumps in the road”. Our “bump” surfaced when the bids to build the church we wanted came in much higher than originally planned. It seems the cost per square foot, due to increased materials cost, had risen substantially in the preceding months. Not to be deterred, the building committee and architects went back to work and in September 1996 construction began.

During the next 3 1/2 years our theme of “DREAM IT POSSIBLE” sustained us as each week parishioners could monitor the progress as the “DREAM” slowly but surely became a reality. A monthly news letter “The Dream Scene” provided information as to what progress to expect during the ensuing month.

A particularly moving event occurred December 8, 1999 when the statue of Our Lady of Fatima was placed in the niche above the entry doors of the new church. Ironically this took place in the rain. Just as 3 years earlier it was raining when removed from its niche on old church. 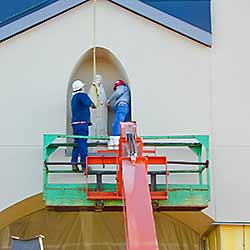 Dedication day, March 11, 2000, was more than the realization of “The Dream”. For all in attendance it was a deeply moving experience. The hymn “Sing a New Church” was at last a reality. Who can forget the flood of emotion and spirituality when, as is traditional, the lights are turned off and then turned on to signify a new church’s existence.

Several months after the dedication Rev. Alex Waraksa was installed as pastor.