My grandfather had two brothers and two sisters. His two sisters were especially devout in practicing the Catholic faith. I was already ordained a priest when they were at the end of their lives. What strikes me is how each sister had a different attitude toward death. Great Aunt Jean, the oldest, told me that she was afraid of dying. She did not go into detail but asked me to pray for her. I tried to encourage her to trust in her faith, and that she lived a good and holy life and that we have the promise of Jesus to share in his resurrection. On the other hand, her younger sister great Aunt Rose was very much ready to die the last year or so of her life. She had had health struggles and so was ready to have all of that come to an end. Whenever I saw her, she spoke in her heavy New Jersey accent: Father Peter, pray that God will take me. Both Aunt Jean and Aunt Rose are now with God, and I trust that they are enjoying the fullness of eternal life in heaven where there is no more fear, no more illness, only everlasting joy with God.

Today’s feast day of the solemnity of the Assumption of the blessed Virgin Mary invites us to reflect on the mystery of life and death. The official teaching proclaims “Mary, the Immaculate Mother of God ever Virgin, after finishing the course of her life on earth, was taken up in body and soul to heavenly glory." The belief of the Assumption of the Virgin Mary teaches us something quite basic about the Catholic religion. It teaches us that the human body is something precious, a gift from God that is not lost at the moment of death. Sometimes we hear people who say that after death, the person lives as pure spirit, as an angel. That is not Catholic teaching. Yes, Jesus said, “When they rise from the dead, they neither marry nor are given in marriage, but they are like the angels in heaven.” They are “like” angels does not mean that they become angels. Angels are different creations than humans. God has made us body and spirit, and both will continue in eternity. “Where Jesus the Head has gone before in glory, the Body which are his followers is called to follow in hope.”

We know that after his death, Jesus rose again, with a different and transformed body, but a body of flesh. He was seen walking along the seashore, preparing food for the disciples, eating with them, and walking with the disciples on the road to Emmaus. Jesus was able to pass through the walls of a closed room and offered his hands to Thomas to touch them. Jesus resurrected body and spirit, and ascended to heaven with his body as well. His body was sacred, during his life and after his death and resurrection.

The second reading speaks to us of resurrection. The Apostle Paul, writing to the Corinthians, insists that being Christian means believing that Christ conquered death because he is truly risen from the dead. Death has no power over us. Our whole faith is based upon this fundamental truth. Even the mystery of Mary’s Assumption body and soul is totally connected to the resurrection of her son. Once and for all, Jesus entered into eternal life with all the humanity he had drawn from Mary; and she, the mother who followed him faithfully throughout her life, followed him with her heart, and entered with him into eternal life which we also call heaven, or paradise, or the Father’s house.

Our first reading this evening refers to when the Israelites traveled in the desert, they carried the ark of the covenant which was a large, ornately carved chest. Inside were the stone tablets of the 10 Commandments. They were a symbol of God‘s covenant with them. A chair rested on top of the ark as a representation of God‘s throne, and that was a sign that God dwelled among his people. After King David made Jerusalem the capital of Israel, he brought the ark into the city to signify that God was with his people, blessing and protecting them. Eventually, the ark was placed in the temple. Mary is the ark of the new covenant. Tablets of stone are superseded by flesh and blood. Mary had been invited to give her flesh and blood to the baby Jesus. In the act of the Incarnation, Mary offered her body as the first tabernacle of the Second Person of the Trinity. God became flesh in the body of Mary.

In our short gospel tonight, the woman from the crowd declares that there is something special about Jesus that honors and elevates his mother. The woman was probably surprised by Jesus’s invitation that she become blessed herself, not by bearing a son of importance, but by believing and living what Jesus taught. We know that Mary did just that. She heard and submitted to God’s word when the angel announced it to her. After Jesus’s death and resurrection, she continued to be obedient to God’s word.

Mary was the first and greatest disciple of Jesus. Her body is transformed, like the body of Jesus, with the strength and vigor of her youth and the wisdom of her old age. She continues to do what she did during her life, teaching us to know and love God. She serves as an example. Her life of faithfulness and service took her to heaven, body and soul. We too, after a life of fidelity and service, will be together with Jesus, body and soul.

What if you find yourself like my great aunt Jean afraid of death or my great aunt Rose, eager to receive it? That is OK because that is where you are. I will also say that I invite you to become a better friend of holy Mary. She can help take away your fears and help you trust like she did in good times and in bad. Mary can also help you be patient and live without anxiety or with less anxiety. Do not hesitate to call on her. She is with you and constantly praying for you. So many times, I have prayed the rosary with someone who has been sick, anxious or dying. The prayerful repetition of the Ave Maria visibly brought about peace: Holy Mary, Mother of God, pray for us sinners, now and at the hour of our death. Amen. 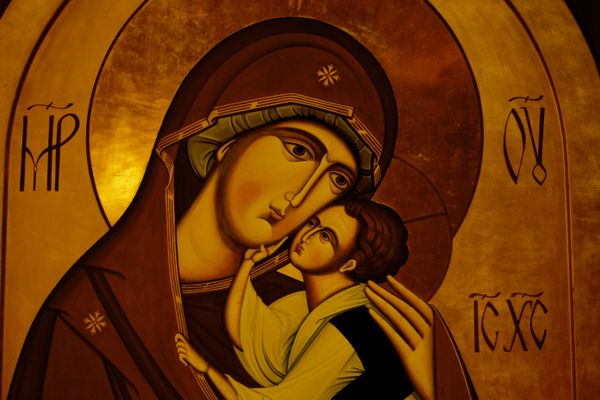 Fr. Pete's homily for the Assumption of the Blessed Virgin Mary. 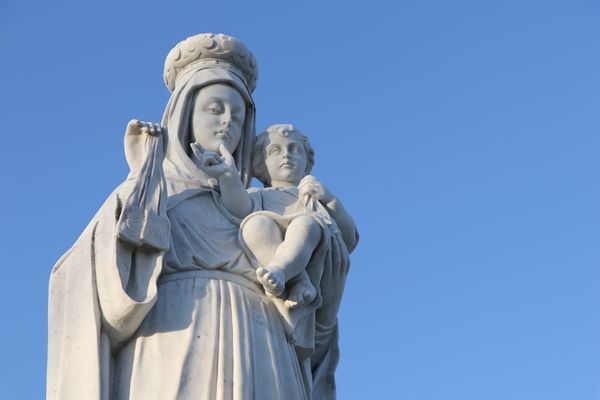