Change is hard especially when it is not our choice. There is a reluctance to change for most of us. It is easier to hang on to familiar coping mechanisms than it is to risk something new that might result in greater difficulties. This is the complaint of the Israelites to Moses in the first reading from Exodus. They say that they would rather have stayed as slaves in Egypt , with all the suffering and oppression, than to risk the freedom into which God was leading them, a freedom that brought a whole new set of challenges. One of those challenges was food. There was not enough, and it was not what they were used to eating. God hears their grumbling and out of great love for his people, God provided manna and quail. Moses tells them that, “this is the bread which the Lord has given you to eat.” Jesus refers to this when he says that God, not Moses provided them bread. The transformation of the Israelites required sacrifice – a giving up of many things that they liked in order to reach the Promised Land and become a new people.

Let us consider another meaning of sacrifice that involved humans in relation to their god or gods. God was understood as all powerful and vindictive and punishing if you did something to upset God or the gods. For many who practiced religion, God was someone to be feared and appeased and placated. Sacrifices were the ritual offering to do that. Offerings of cereal grains or animals were placed on an altar where they were burned so that humans could not eat them. The belief was that if you make this sacrifice, maybe God will show you favor. In some cultures, they even sacrificed human beings to a god. It is important to know this history of religion to understand today’s Gospel. Why? Because Jesus turns this belief around. Jesus says in the gospel today “this is the work of God, that you believe in the one he sent.”

Our god is a god of unconditional love who sent His only begotten son into the world to teach us and show us the way to love as He loves.

Some people still believe that if they make sacrifices to God, they will earn God’s love. Not sacrifices like offerings on the altar, but sacrifices of prayers and penances will bring God’s favor. They still have not understood Jesus and his message and his mission. This is not to say that all sacrifices are bad. They are actually good for the spiritual life. Jesus in essence is saying this sacrificial transaction method for receiving God’s favor has come to an end. I am the one and eternal sacrifice.

Instead of you needing to feed God with your sacrifice, God turns it around and feeds you with his very self. It’s really mindboggling. Each time you come to this altar, let God feed you not just with ordinary food but as he says with bread from heaven which is Himself. Jesus says: Receive my unconditional love into your whole being. When we do this, we then find the courage and the confidence to return the same love in kind. To give back the way we were loved.

The Eucharist is the reminder that day after day, Jesus loves us unconditionally and does not require that we placate him in any way. In the Eucharist, Jesus offers himself as the Bread from Heaven. He is total gift. When we take him into our bodies, not just our minds, He transforms us to be more like Him. And we hopefully become less resistant to changes that are inevitable in our lives. 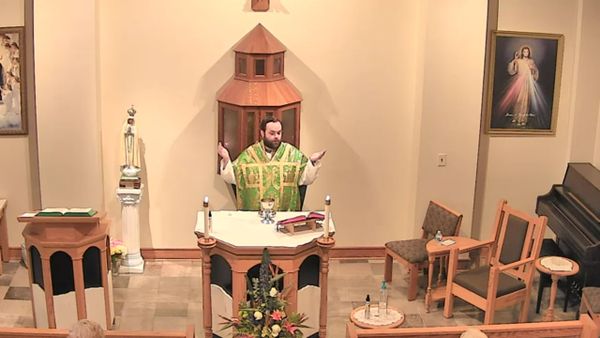 Fr. Adam celebrates noon mass for the Tuesday of the Eighteenth Week in Ordinary Time - August 3, 2021. 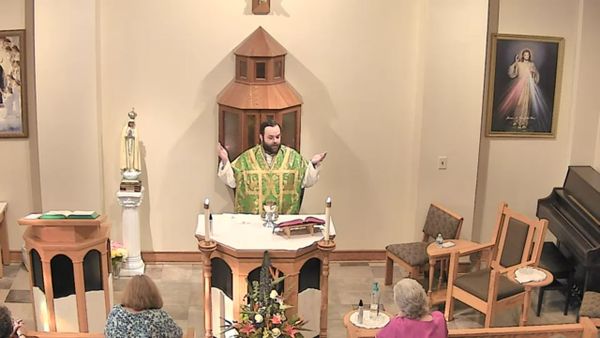