Have you or anyone in your family done one of those DNA tests to determine your ancestry? I have. It gave me no surprises as I have known that my Mom’s heritage is from Eastern Europe and my Dad’s from the Mediterranean and Ireland. People in every time and place intermingle. My identity contains ethnic heritage from those places, and I am so much more. Who do people say that I am? I am sure you have your answers after having known me for a year. A Catholic, a priest, a middle-aged man, a son, a brother, a pastor, a friend, an uncle…. and those labels go on and on. Does identity have to do with DNA, ethnicity, religion, where I was born, color of skin, cultural upbringing, education, profession…? Who do I say that I am?

That question of identity is one that continues to plunge human beings into a great mystery. We encounter the question of identity in today’s Gospel when Jesus asks the disciples: who do people say that I am? The different responses come indicating the identity of Jesus linked to one of the great prophets from the history of Israel. They were giving Jesus a great compliment because Jeremiah, Elijah were the expected forerunners of the Messiah, the Anointed One of God.

OK. That is the public opinion. But, he indicates to the 12, you know me more intimately as my close friends and disciples. So who do you say that I am? What is your opinion? Peter’s response does not come from experience or learning or logic. It is a response that is given to him by God our heavenly Father. You are the Christ, the Son of the living God.

Christ is not the last name of Jesus. So get out of your head that Jesus Christ was the son of Mary Christ and Joseph Christ. Christ is the Greek word for the Hebrew word Meshiach or Messiah, and that word translates as “anointed.” In the understanding of Israel, the Messiah would be the anointed one of God. There was a political understanding that the messiah would restore Israel as a great kingdom. Some expected that the messiah would free Israel from the rule of the Roman Empire. He will be a great human leader like King David.

Simon Peter also says you are the Son of the Living God which indicates more than just a human hero. This is the mystical faith that is at the heart of Christianity. To profess this faith is to be a Christian; to deny that Jesus is the Messiah, the son of the Living God is to deny Christianity. And of course, we know that Jesus is the “Beloved” Son of God. That relationship is so important.

Simon is praised for his answer because it comes from God the Father. However, Peter’s personal human ignorance is exposed because God did not give him full understanding of what he said. Next Sunday, we will hear the rest of the story. Jesus is indeed Messiah and Son of the Living God, but this identity is NOT as they commonly understood it.

After praising Peter, Jesus began to show his disciples that He must go to Jerusalem and suffer greatly, be killed and on the third day be raised. Can you imagine what it would sound like and feel like for them? They just heard Jesus affirm Peter that Jesus was great, if not the greatest man of all time. Messiah and Son of God. How can it be that the greatest must suffer and be rejected and die? And maybe Peter just heard part of the statement or he did not understand what it meant to be raised on the third day. Because he blurts out: God forbid Lord! No such thing will ever happen to you.

That does not fit into my concept of your identity. The great messiah and son of the Living God is powerful and wonderful and great and admired by everyone except his enemies, and he lives forever and ever. No way can he suffer greatly and be killed by our leaders. These are two opposite things – a great leader like David who united the 12 Tribes of Israel and was a powerful king who defeated all enemies of the state. He did not suffer and was not killed but respected by elders, priests, and scribes. They honored him. Jesus, that is not what I meant when I answered the question about who you are.

So, in a matter of minutes, Peter was praised for a godly answer and then rejected by Jesus for a human answer. Get behind me Satan. You are an obstacle to me.

And Jesus continued: Whoever wishes to come after me must deny himself, take up his cross and follow me. This is mind blowing. Jesus indicates that those who are in His kingdom must do what He is about to do, not merely state their faith but live their faith. Greatness is not about being over and above others but reveals itself in loving self-sacrificing service. Where our leader has gone, so we follow. Can we do that? Deny ourselves? Die in humiliation on a cross? Do we identify as Christian when it is put in these terms? It is hard. But it is not impossible. With God’s grace, all things are possible.

Peter got it; and then he did not get it. Many times, I must admit, I totally relate. Even as a priest, I realize I do not have all the answers. I strive to be a faithful disciple like Peter. I understand and then something happens, and I get confused. But I keep going. I encourage all of you to keep going. Trust that you are on the right path, and God will give you what you need to be faithful. Pray for that gift. Keep trying to deny yourself and take up the cross. Ask Jesus Christ the son of the Living God to reveal Himself to you and to reveal Himself in you as live this great mystery of love. 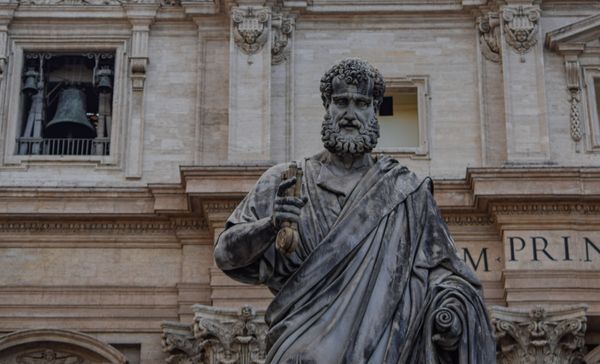 (Español abajo) “[Y]ou are Peter, and upon this rock I will build my Church.” This is the great papal text. The event in the life of Christ which we 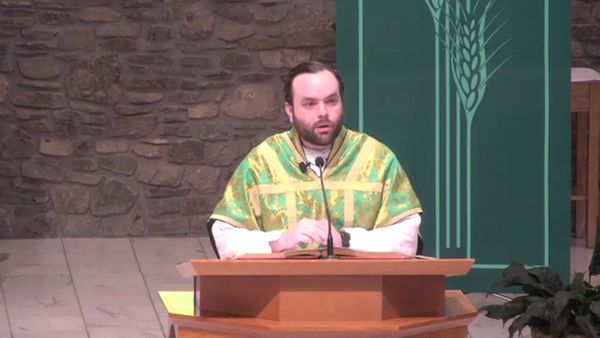 Watch the live stream of the Pro Life Rosary at 10:30 am followed by the celebration of the mass at 11:00 am.